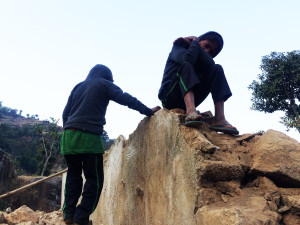 In wake of such cataclysmic devastation by the 2015 April earthquake, this project started providing relief to the communities that we were in dire need of support. We started our relief campaign from Sindhupalchok district – Sipapokhare V.D.C. where we covered total of 9 wards. Total of 1045 families i.e. more than 7000 people were provided shelters and amenities. We were also able to work in Dhading, Ramechhap, Dolakha, Sindhuli and Bhaktapur where much attention was needed. Around 1800 families that is altogether more than 8000 people were provided relief. Also basic amenities like food (rice, lentil, sugar, grains, wheat, salt, oil,), shelter (tarpaulins, mats, mosquito nets, blanket), clothing, hygiene dignity packages and educational and material logistics were provided to more than 13 schools.

AAROH embarked on two months reconnaissance and relief campaign from 1st May-13th July 2015.We supported all the communities of districts of, Sindhupalchok, Dhading, Dolakha and Sindhuli with necessary amenities in achieved to relief schools of Ramechhap and Bhaktapur.